Ever wondered why poinsettias are so popular at Christmas?

We’ve discovered the legend and history of why the poinsettia is the go-to Christmas flower.

And, we’re excited to share our insights with you.

We’re going to start by setting the record straight.

The flowers of the plant are the tiny berry-like structures you’ll see at the end of the bracts.

This doesn’t make the poinsettia any less stunning.

And it doesn’t make its story any less magical.

Ready to find out why these bright, festive plants became a favourite for the holiday season?

How Poinsettias Came to Be The Offical Christmas Flower

1. Cuetlaxochitl and Pepita - the Origins of the Poinsettia

Ready to hear a fascinating story that begins in 14th Century Mexico?

This is where the plant that we know as poinsettia has its origins.

Back then, poinsettia was known as “Cuetlaxochitl.”

It was used to create textile and clothing dyes.

And it’s sap was also thought to reduce a fever.

The Aztecs prized the plant and the last Aztec emperor, Montezuma, was captivated by it.

It wasn’t until the 17th century that the plant first became associated with Christmas.

This was when Franciscan monks in the town of Taxco de Alarcon first used the shrub in Nativity processions.

It was also at around this point in history that the legend of Pepita and the “Flowers of the Holy Night” began.

Image: J.Trandell of a fresco by Diego Rivera in the Palacio Nacional in Mexico City

According to this legend, Pepita left her village to visit the Nativity scene at the chapel.

She couldn’t afford a gift for baby Jesus, so she picked some weeds and took them.

When she presented the bouquet of weeds to Jesus, they turned into stunning red flowers which locals knew as “Cuetlaxochitl.”

The blooms were referred to as the “Flowers of the Holy Night.”

According to this legend, this was how the plant we know as poinsettia became associated with Christmas.

We love this magical tale.

But, Mexican folklore doesn’t fully explain why the poinsettia is such a feature of Christmas.

To discover the rest of the story, we need to transport you to the 19th century United States and introduce you to a man named Joel Roberts Poinsett.

Back to the top

2. Joel Roberts Poinsett and The Adoption of The Poinsettia Name

Nearly two-hundred years after the poinsettia’s association with Christmas began in Mexico, Joel Roberts Poinsett took its festive story to the United States.

He was also a passionate botanist.

Late in 1828, Poinsett was on a diplomatic trip to Mexico when he came across the plant known locally as “Cuetlaxochitl.”

He was captivated by the red leaves and began shipping the unfamiliar blooms back to his home in South Carolina where he had a greenhouse.

Poinsett began cultivating the plants and gave them to colleagues and friends around Christmas time.

News of this beautiful shrub spread to Pennsylvania where nurseryman Robert Buist began to cultivate it.

Buist was the first person to sell the plant using its botanical name “Euphorbia Pulcherrima.”

It wasn’t until 1836 that the brilliant red and green blooms became formerly known as “Poinsettia.”

The plant was named after Joel Roberts Poinsett, the man who brought it to the United States.
Back to the top

3. Paul Ecke Sr. and The International Rise of The Poinsettia

The popularity of the recently renamed poinsettia grew substantially in the early 20th century.

It was at this time that Paul Ecke Snr. entered the story...

He was the first person to develop plants that could be grown in pots indoors.

In 1923, he founded the Ecke Ranch which now provides around 80% of the poinsettia plants that are bought and sold in the United States.

This is the path that the poinsettia has taken to become the most popular plant sold during the holidays in the United States.

In the six weeks leading up to Christmas around 70 million poinsettias are sold in the country.

And, since 2002, December 12 has been known as National Poinsettia Day.
Back to the top

4. Poinsettias in The UK at Christmas

It’s not only in the United States that poinsettias brighten homes at Christmas time.

The red and green shrubs are also a familiar site in the United Kingdom (UK).
During the 1960s, nurserymen like Joseph Spray saw the plants in American literature and began bringing them over from the United States.

The widespread popularity of poinsettia plants in the UK did not really take hold until the 1980s.

Today, their popularity is stronger than ever, especially around Christmas.

During the festive season, you can see them lined up along the shelves of nurseries and supermarkets.
Back to the top

5. Tips for Choosing & Caring for Poinsettias

Want to make sure your poinsettia keeps its colour for as long as possible?

The main attraction of this plant is its vibrant colours which are usually red and green but can be other shades such as white, pink, variegated, and burgundy.
We’re happy to share some tips to help you choose the right plant and keep it healthy.

Never buy a poinsettia that’s close to open or automatic doors as it will have been exposed to damaging UK winds.

Check the soil before you buy a poinsettia if you can and make sure it’s damp rather than very wet or dry.

Wrap your poinsettia when you buy it so that it’s protected during the journey home and not exposed to draughts and temperatures below 12 degrees Celsius.

Don’t overwater your poinsettia as the roots can quickly become waterlogged.

Check the leaves of the plant regularly as if they are yellowing or falling off this means you are watering too much and/or too often.

Make sure that the temperature around your poinsettia is around 15 to 22 degrees Celsius.

Keep your plant out of draughts.

If you buy the right poinsettia, and care for it well, you’ll have a wonderful display of colourful leaves for Christmas.

There’s an array of other beautiful blooms that add a festive touch to your home.

The poinsettia is not on its own.
Back to the top

If your poinsettia is starting to die off, you can rescue the brachts that are still looking good and create a colourful floral arrangement.

Trim the stems just below the leaves and dip the ends in boiling water for a few seconds.

Doing this gets rid of the sap.

Then, place the stems in cold water.

With enough water and attention, your arrangement should last for as long as two weeks.

Looking for a contrast to the poinsettia?

There are several blooms that can brighten your Christmas.

One of our favourites is the anemone.
These striking flowers are in season from October to May.

They come in a variety of colours such as white, red, pink, and purple.

Personally, we love the snow-like colour of the white anemone for the holiday season.

Other blooms you can use to decorate your home at Christmas are:

Calla lilies - elegant and graceful blooms that are also known as Arum lilies.

Roses - a traditional choice throughout the year that can add a touch of romance to your festive decor.

Berries and evergreens - elements such as pine cones and holly sprigs can bring a Christmas vibe to your home.

Winter clematis - glorious for its appearance and scent, this plant has bell shaped flowers that look amazing in the garden or as cut blooms.

Pansies - perfect for adding a pop of colour to your seasonal celebrations.

Snowdrops - who doesn’t love the pure white beauty of snowdrops in the winter months?

There’s certainly no lack of choice when it comes to winter flowers for decorating your home at Christmas.

Take a look at our blog post about flowers for winter weddings.

It gives you an insight into what flowers are in season around Christmas time.

“Winter Weddings: What Flowers Are In Season?”
Back to the top

At Blooming Haus our corporate and event festive transformations are already underway!

We absolutely adore this time of year.

To add to the magic we're hosting a seasonal Christmas masterclass with festive wreath-making while sharing our pro tips on how to tablescape and decorate like a complete pro.


It's not to be missed and spaces are filling up fast.

You can also take a look at our online shop for further inspiration.

For help with floral design at Christmas and throughout the year contact us at:

We’d also like to hear your Christmas flower stories and comments.

Why do you love poinsettias and which other blooms are your favourites?

Pop a note in the comments.

We look forward to hearing from you.
Back to the top

Other Related Journal Entries You May Find Useful

1. Your Guide to Biophilic Design
2. The British Royal Families Favourite Blooms
3. Best Royal Garden to Visit in The UK
Back to the top
Don't forget to leave your thoughts in the comments section, we would love to hear from you!
Back to the top 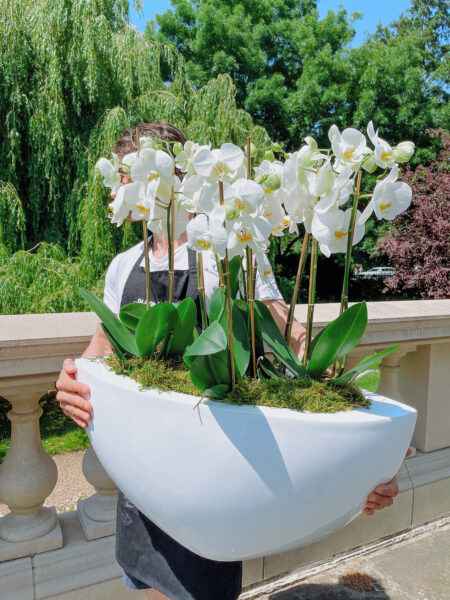 The Best Potted Plants for Office 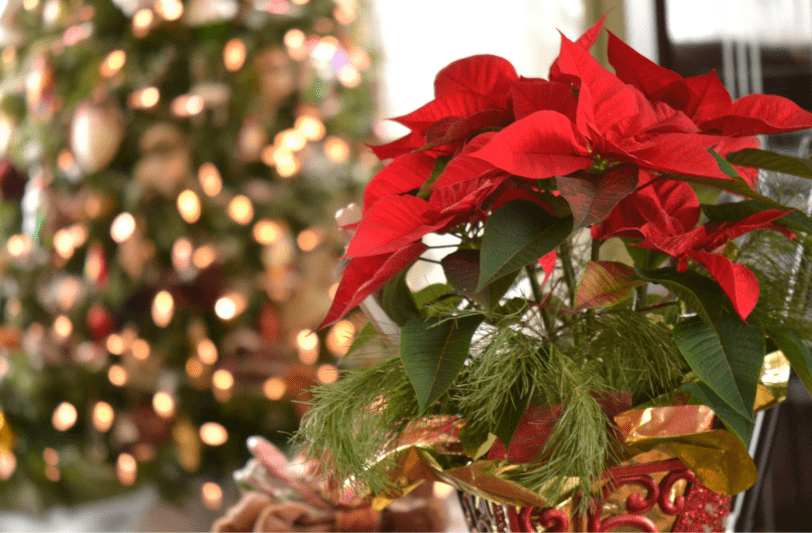 Why Are Poinsettias The Official Christmas Flower?