Introducing, 10 flowers (you may not have known) are named after the Royal Family - and more fascinatingly, WHY!

The Royal Family have been getting a lot of press recently, from the Queen's Platinum Jubilee to Prince Louis's energetic facial expressions and cheeky personality - we just can't seem to get enough of them.

So, what better time to share some interesting floral facts around the topic?

The trend of Royals giving their names to flowers began in the 18th century with Queen Victoria and continues to this day.

Flowers Named After the Royal Family

Our Queen is the longest-reigning monarch in this country's history.

She's also the most well-known member of our Royal Family across the world.

So, it's no surprise that she has a rose named after her.

The silver-pink bloom was first named in the 1950s to mark the accession of Elizabeth to the throne.
It's a floribunda rose with flowers that are large and pink.

Rose growers love the 'Queen Elizabeth' because it's hardy and reliable.

It's also great for creating hedges.

This rose blooms from mid-summer to early autumn and is perfect for creating a romantic bouquet.

David Austin recently announced the new of their new "Elizabeth Rose" to commemorate the Queen's Platinum Jubilee - you can read all about it here.
Back to the top

This breathtaking English rose was named for Princess Anne, Princess Royal, in 2010.

It was named after this popular member of the Royal Family in recognition of the work she does for the Riding for the Disabled charity.
This rose has a long blooming period, from late spring until the first frosts arrive.

It has glorious rich pink flowers that consist of an array of narrow petals.

These blooms are just stunning and look incredible when paired with cool blue partners like nepeta and lavender.
Back to the top

The flowers of the Queen Victoria lobelia are as distinctive as the plant's famous namesake.

They stand tall, straight, and red, adding a vibrant splash of colour to any garden.

As a cut flower, these blooms are gloriously graceful.

We love using them in our floral creations to add elegance and style.
The scarlet flowers of this stunning plant can be seen from July to September.

They may not be long-lasting, but they certainly make a big impression, and they're a spectacular addition to any floral display.
Back to the top

This is one of the latest flowers to be named after a member of the Royal Family.

It made its debut just before what would have been Prince Philip's 100th birthday in June 2021.

This beautiful deep pink rose was presented to Queen Elizabeth II, the Patron of the Royal Horticultural Society.

Examples of the rose now feature as part of the mixed rose border in the East Terrace Garden of Windsor Castle.

This is highly appropriate given that Prince Philip played a major role in designing the garden.
Image: David Austin Roses
This magenta bloom adds a sparkle of colour and a delicate scent to any floral landscape.

It's a gorgeous tribute to a respected man and flowers from late spring through summer.
Back to the top

The Queen Mum is still remembered as one of the most popular members of the Royal Family.

This bright and charming agapanthus is named to reflect her popularity.

Its dainty beauty is a welcome addition to garden borders when it flowers in July and August.
Image: Southern Living Plants
The flowers of this agapanthus are white with a touch of blue at the base.

When displaying them in a home or office space, simplicity is everything.

Gathering a handful together in a vase is an excellent way of celebrating the individual beauty of each bloom.
Back to the top

Princess Charlotte was one of the Royal children who stole the show at the recent Jubilee celebrations.

She's used to being in the limelight and even has a flower named after her.

The Princess Charlotte Chrysanthemum was given its name in advance of the Princess' first birthday.

It has delicate pink blooms with green tips.
Image: Dave's Garden
These eyecatching plants bloom from late summer to autumn.

They're a great choice for adding some sparkle to your environment during the second half of the year.
Back to the top

Princess Charlotte's proud parents are also members of the Royal Family who have a flower named after them.

The William and Catherine Rose was named in honour of the Royal Wedding of Prince William and the Duchess of Cambridge, which took place at Westminster Abbey on April 29, 2011.

The blooms of this rose are classic and tender.
Image: David Austin Roses
Each bud is creamy orange in colour, and it blooms into a pristine white flower.

The rose bushes that produce these flowers are robust and perfect for herbaceous borders and rose beds.

They have olive-green foliage and come alive with flowers throughout the summer months.
Back to the top

Keeping it in the family, Prince George also has a flower named after him.

This time it's a bright and fun daffodil.

The Prince was just nine months old when this variety of narcissus was given his name.

It was chosen for the 'sturdy nature' it shares with the young royal.
Image: RHS
The blooms of this daffodil appear in spring.

The outer petals are white, and the trumpet is a pale yellow colour.

They're a perfect mix of sturdiness and sunshine.

Just like the Prince himself.
Back to the top

Diana, Princess of Wales, remains a hugely popular member of the Royal Family even after her death.

The public loves her for her innate beauty and good heart.

So, it's no surprise that this rose was named after her.

It was first presented in a ceremony at the British Embassy in Washington DC and was chosen for its elegance and gentle beauty.

These are attributes it shares with its Princess namesake.
This classic hybrid tea rose has glossy green foliage.

Its blooms are creamy-white with pink edges.

They open from summer to autumn, creating a beautiful serene aura.
Back to the top

Princess Diana is so loved that she has more than one flower named after her.

The Princess Diana Clematis was introduced in 1984 and has been popular ever since.

This deciduous climbing plant is a wonderful bloomer that can fill gardens with colour.
Each flower is tulip-shaped and reddish-pink in colour.

The tips of the flowers are bright pink, while the stamens are cream and maroon.

They bloom from mid-summer to early autumn and reflect the bright beauty and personality of the 'People's Princess.'
Back to the top

Bring a Royal Vibe to Your Event

You may not be a member of the Royal Family or have a flower named after you, but that doesn't stop you from bringing a Royal essence to your celebrations.

As luxury London florists, we're experts at creating unique and exquisite florals that grace any event.

And we're excited to bring our skills, expertise, and attention to detail to your special occasion.
Flowers by Blooming Haus
We know that every design element is important, so nothing is left to chance.

From sketches done in situ, we create detailed drawings.

Once these have been agreed with you, we complete our designs.

And, we're there on the day to make sure everything goes to plan and that you feel as special as a member of the Royal Family.

CONTACT US
Flowers by Blooming Haus
Looking for flowers for your home or office space?

Everyone saw Prince William talking about this theme during the Jubilee celebrations.

"Together, if we harness the very best of humankind and restore our planet we will protect it for our children, for our grandchildren, and for future generations to come.”

We're with him, and other members of the Royal Family, on this subject.

Our design process is sustainable.

We arrange for a tree to be planted after each event we design for is completed.

So, you can join us, and the Royal Family, in protecting the planet for future generations by having us design the florals for your event.
Flowers by Blooming Haus
Want to feel special like a Royal Family member would at your event?

We promise to give you all of our attention and expertise.


We look forward to hearing from you.

Have something to say about flowers named after the Royal Family?

We'd love to see your questions or comments.

Just pop something in the comments, and we'll get back to you ASAP.

1. Best Bouquet Shapes and Styles for Your Wedding Dress Silhouette 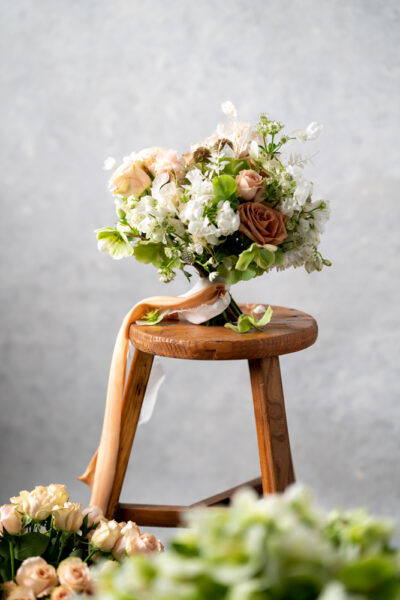 How To Choose Your Wedding Bouquet 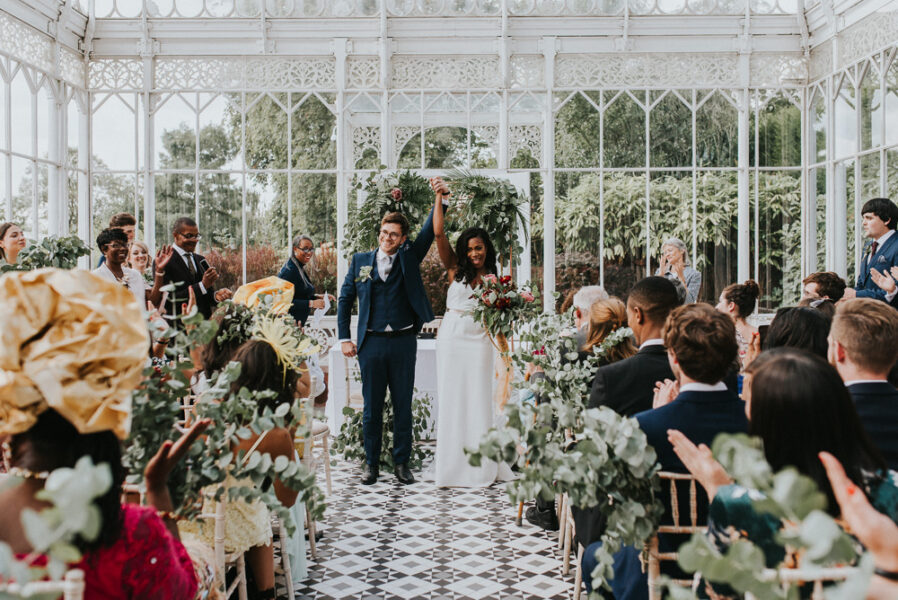 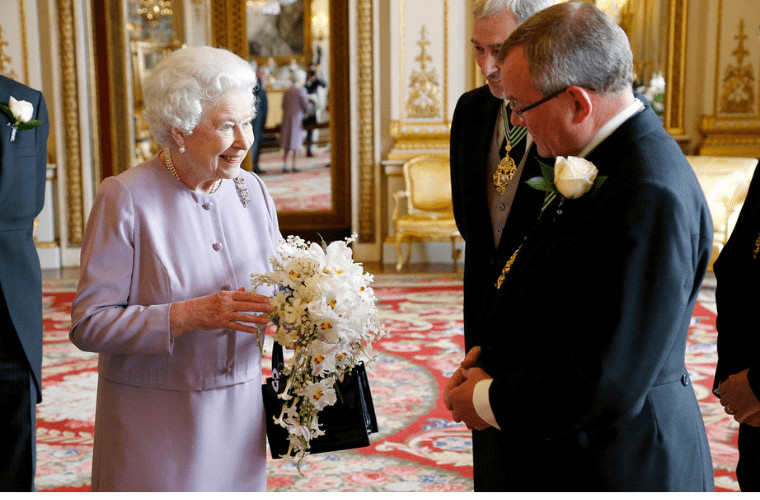